Situated at the centre of the Adriatic coast, our Hotel is in a comfortable position among the beautiful seaside towns of Roseto degli Abruzzi and Pineto, and is the ideal starting point towards interesting naturalistic, cultural and gastronomic destinations: from sea to mountain in 45 minutes!

The very close city of Pescara, characterized by a young and modern style, offers any kind of entertainment: shopping, sport and culture. The main places of the city are Piazza Italia, the Fish Museum, the Genti d'Abruzzo’ s Museum, Saint Cetteo’s Cathedral, and Gabriele D'Annunzio’s Birth House Museum. You can enjoy the spectacular night view on Ponte sul mare, a very famous bridge of the city.

Always to south direction, over Pineto, a few kilometers from the hotel, also reachable by a relaxing walk under the characteristic pine grove along the coast, you can see the suggestive Cerrano’s Tower, an ancient Bourbon bastion , that nowadays is a Museum of the Sea, and is positioned on the uncontaminated beach in its marine protected area.

Venturing into inland areas, it’s possible to visit the art city of Atri, also known for the licorice, which presents some historic buildings belonging to the House of Acquaviva, and also il Oasi WWF centre of the spectacular Natural Park of Calanchi. The noble residences , the square and the characteristic alleys belong to the long history of Atri which boasts a very ancient foundation. It organizes several initiatives and events during winter and summer.

The hilly hinterland presents ancient villages such as Mutignano, Montepagano and others more, rich of history and characterized by panoramas and views which contain the chain of Gran Sasso and the marine horizon in the same time. Following the areas of the rivers Vomano and Mavone, on the state highway 150 and secondary neighbouring roads, you can find the Valley of Abbeys, whose most important examples in the villages of Morro d’Oro, Notaresco, Canzano and others more. They include Castelbasso, which has become in the years centre of remarkable artistic events promoted by the local institutions for the divulgation of contemporary art. 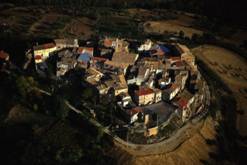 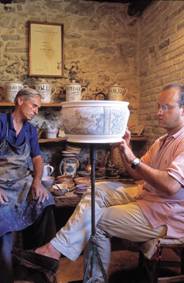 Following the state highway 150 to the end you enter the National Park of Abruzzo and Monti della Laga, that connects the mountain versants of Teramo and L’Aquila, which are divided by the summit Corno Grande, with a large variety of landscapes which characterize the two provinces. It was established in 1991 and it is the third among biggest Parks of Italy for territorial extension. Inside the Park , going higher, you can find small towns and villages full of naturalistic beauties and ancient traditions. Traditions were transmitted through the precious patrimony of wine and food, and also through the skillful carftsmanship which has linked the productive activities of local communities to the resources of a varied territory for centuries. One of the most famous villages, in addition to Senarica, Pietramela, Isola del Gran Sasso and many others, is certainly Castelli, perched on the Abruzzo appenine, center of the local majolica art that was exported in the most flourishing European courts in past centuries, and is still practiced in workshops by the skillful artisans of the town.

Along L’Aquila’s versant it’s possible to admire several places of historical and scenic interests. L’Aquila, capital of the region, which was gravely damaged by the earthquake in 2009, has not lost its fascination as ancient historic centre where you can see the impressive Spanish Fort, belonging to the XVIth century, Saint Mary in Collemaggio’s Church, that was founded at the end of XIIIth century and is linked to the figure of a Pope, Celestino V Hermit, and to Templars, the Ninety-nine Cannelle Fountain and a large number of other monuments, which show the cultural vitality of the city over the centuries. 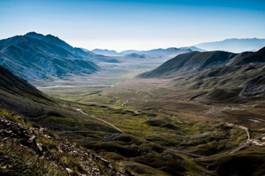 The magnificent sceneries in Campo Imperatore made these places famous as Little Tibet in Italy. The Upland is connected, through numerous itineraries of excursion by car, bike, mountainbike or by horse, to the main boroughes in the vicinity such as Assergi and Castel del Monte. Not so far there are the villages of Santo Stefano di Sessanio, completely restored in its original medieval aspect, and Rocca Calascio, on of the most famous castles in Abruzzo, often chosen as location for intenational movies sets. Going donw the roads in the suggestive mountain landscapes in L’Aquila’s province you can still notice the caracteristic dry-stone huts, symbol of pastoralism that people practised in Abruzzo by climbing down from the slopes of the appenine to the coast through the “tratturi”, typical country roads that were mentioned by Pescara’s Poet Gabriele D’Annunzio and that are applied to UNESCO World Heritage.

The three aspects, mountain, hill and sea, of Teramo’s province represent a summary of biodiversity of the whole region, as well as its rich wine and gastronomy variety. The heart of the province is Teramo, where it’s possible to admire the remains of ancient Roman foundation at the archeological digs of the amphitheatre. The historic centre presents Museums and the Cathedral in Romanesque style, typical style in the territory originally inhabited by italic Pretuzi’s population. Particularly interesting is Monica’s Castle, built in the end of XIXth century in an eclectic and new-gothic style. 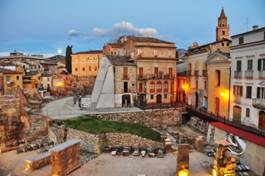 Going to north there is Campli, where it’s possible to visit the Holy Staircase and to enjoy the typical Campli’s Porchetta (pork meat), until you reach the last fortress of Bourbon Reign, the majestic Civitella’s Fortress, erected in the XVIth century with strategic and defence close to the borderline between Ascoli’s county and Abruzzo’s one for a strategic control of the territory. This admirable example of military engineering today is site of the Museum of Weapons and ancient Maps.

Various and diversified is the coast too, from the long sandy beaches of Teramo’s litoral to the Trabocchi in southern coasts in Pescara and Chieti’s provinces, in particular between Ortona and Vasto, whose landscape is characterized by coves, promontories, high and jagged cliffs. The Trabocchi, fishing machines built on piles in a primitive architecture, important element of the landscape heritage in lower Adriatic, can be seen above all in the long stretch of coast from Ortona to Vasto: the most spectacular ones are in San Vito Chietino, Rocca San Giovanni, Torino di Sangro, Fossacesia, the latter is famous also for the presence of the important San Giovanni in Venere’s Abbey dating back to the XIII century. 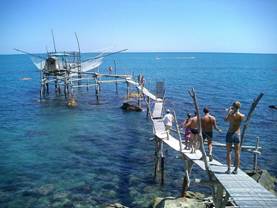